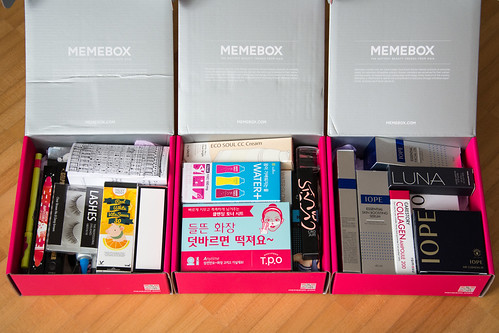 After my ranting about the customs declaration and delays, I was pleasantly surprised to find out that I had won the 2nd place Memebox Jackpot Box, which was pretty lucky, as only 14 other people won this box (15 including me!). At least all that trouble wasn’t in vain!

I won’t go into the details of this box — there are just too many products in there, 24 of them actually. Since I haven’t been a long time Memebox customer, I did not get any duplicate products. I noticed that most of these products were featured in other recent Memeboxes and Superboxes. Thankfully none of them were purchased by me. 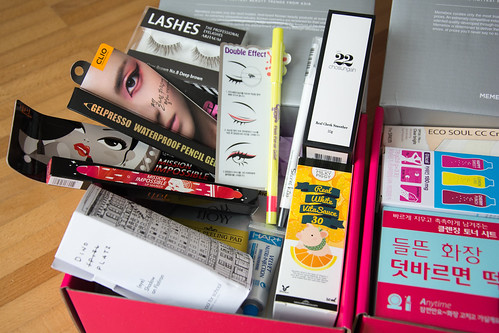 This box included 3 eye liners, which unfortunately, I very rarely use. Two came in black and one in hot pink. Two of them were randomly selected. I wish I had received other colours besides another black and pink.  There’s also mascara, which I also rarely use because most of them stain or flake off. There were 2 lip products randomly selected as well, and although one of them was a brighter coral than I am used to, I am happy that I didn’t get any orange, bright red or bubblegum pink, since those are my least favourite colours.

Included were 2 eye shadow products, one in pencil form and the other in a tube form. I will have a fun time trying them! The 3 BB/CC creams that I received should work well with my skin tone. I don’t think I’ve ever received one from Memebox that hasn’t matched. 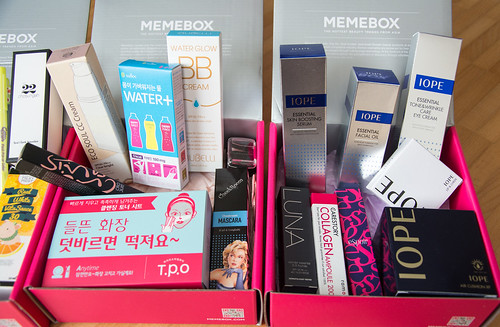 Plenty of skin treatments were in there too, with a handful from IOPE, which is a very expensive brand. A few other random items were included too, like some flavoured water sachets, mascara, eyelashes, toner wipes, peeling pad, collagen and a tube of hair treatment. 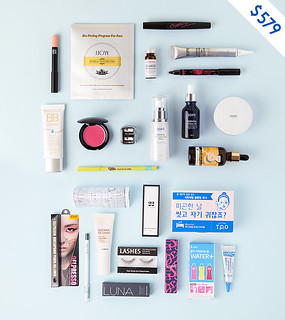 So yeah, very happy with winning this box out of all the others! I was so worried that I would just get the last place box. I didn’t receive any nail polish or some other lip products, but that’s ok. I am happy with what I received. I will hold off on buying more boxes now, since I have way too much stuff to use. I also think that I need to stop receiving boxes by mid-November. Packing up will commence afterwards.

I’ve been working on this for a long time, and it’s pretty much done, less a few products that I have yet to add.

Please do check it out! Here are some nifty features:

I will be adding all my products on this site, so look out for new and exciting items coming in the next few months. The collections feature (dropdown selections) helps you locate all items in that set or style.

Shipping works a little differently, so remember to check out the shipping information section and my terms and conditions before purchasing. The contact page works like a charm, so now it’s an easier way to get in touch with me, rather than exposing my email address.

I’ve been wanting to make bracelets for a while now, but buying chains are always a daunting and expensive task. I started making my own jump rings, using only 19-20 gauge wire and different sized knitting needles. It really hurts my thumb and index finger when I do the coiling. Still, this allows me to make chainmaille! I’ve been playing around with a couple of simple designs using different wire colours:

I think these would be the best if I want to hang charms from them. I even made my own hook clasps! After making three, my fingers ached like crazy, but only from the jump ring making. I need a proper tool to coil them if I want to save my fingers…

I particularly like my solid copper bracelet, using antiqued and bare copper wires in 19 and 20 gauge. I got the antiqued copper wire from Malaysia, but I can imagine antiquing some myself using a sulphur solution. Sounds fun.

I attached the baby pink tart to it, since it already had a copper loop. I think I like it with just one charm!

What do you think? Should I list the bracelets empty and let people choose a charm to go with it, or list it already with one charm? New moulds arrived in the mail today, and I can’t wait to make new foods next week (after my Germany trip this weekend). I guess I will decide then, unless you guys can give me some input.