Spätzli has shown some signs of aging for the past couple of months. He’s now a little over 1 year and 7 months old. He had flaky and slightly scabby skin, so we took him to the vet. The vet insisted it was a bacterial infection and gave him antibiotics, plus an oral probiotic paste. At the same time, he was also treated for parasites even though there was no evidence of it.

After following the course of antibiotics, there was no improvement. I wasn’t convinced that there was anything more the vet could do besides extensive hormonal tests, so I just made little adjustments to his home, such as removing rough hay and sand, and trying to use only soft soil and tissue paper inside his house, where he spends most of his time rubbing against. I am also still feeding him the probiotic paste every other day, which I think is good in any case. 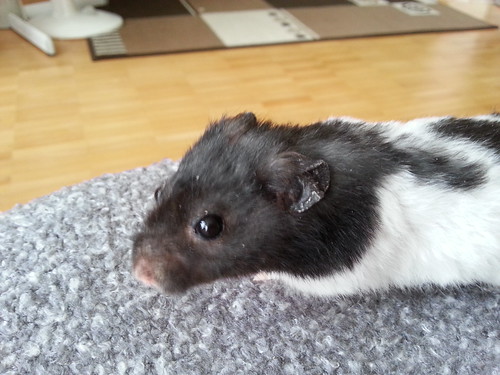 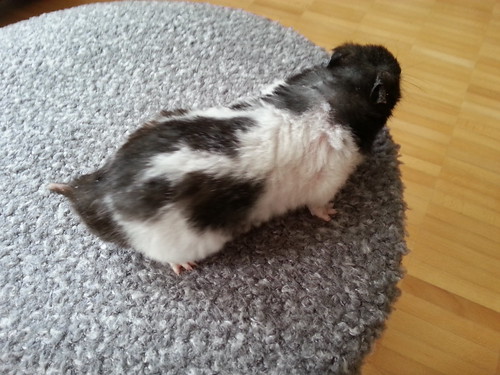 His fur is becoming sparse in some areas, like the back of his neck. You can also see his dry ears. He does not look so bad in person, and he’s still quite active. I’ve just started rubbing a tiny bit of aloe vera gel on his ears and flaky areas, and I think it’s helping to relieve the dryness. I get to do this only once a day, so results are slow. I also don’t want to use too much in case he ingests it. 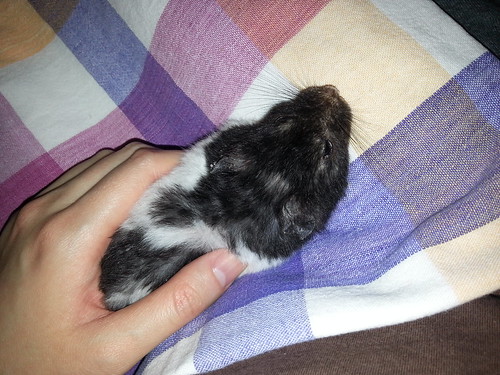 Here he is on my lap. I put him on a tea towel because he sometimes brings soil over from his cage or makes a small mess when he eats fresh corn on my lap. After his snack, he sometimes sleeps on me for an hour, and sometimes only for 10 minutes or less. He tells me when he would like to go home by climbing onto and putting all four feet on my palm. If I put him down, he’ll do it again, and that’s when I’m sure that he wants to go home. I find that too cute. ^-^ It’s definitely something he came up with, and he’s been using it since he first trusted me.